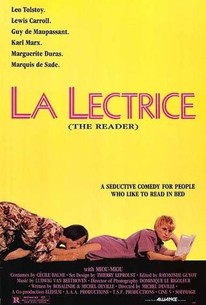 At the suggestion of a friend, Constance (Miou-Miou) places an ad in the paper offering her services as a reader in this romantic comedy drama. Her job leads her to a variety of employers and occasional romantic involvement. Maria Casares plays the widow of an East European general who has Constance read Tolstoy and Marx. Pierre Dux is the local magistrate who prefers to hear the memoirs of the Marquis de Sade. She also has an affair with a harried business executive played by Patrick Chesnais. This film was named the "Best Feature" at the 1988 Montreal World Film Festival.

Michel Raskine
as Man at Agency

La Lectrice is a movie in love with words -- deliriously intoxicated by the stories and images in the pages that Marie reads.

There are no featured audience reviews yet. Click the link below to see what others say about La Lectrice (The Reader)!