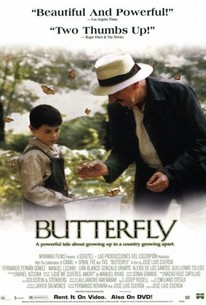 Veteran director Jose Luis Cuerda delivered this sensitive portrait of a child coming of age during a tense political situation just before the Spanish Civil War. On his first day of school, frail eight-year-old Moncho (Manuel Lozano) is so terrified by the imposing figure of his teacher Don Gregorio (Fernando Fernan Gomez) that he flees into the nearby woods. In spite of his authoritarian appearance, the schoolmaster proves to be a kind, free-thinking Republican who teaches Moncho the virtues of being good. The boy is soon spending much of his time with the elderly Gregorio in the Galician countryside, admiring such wonders of nature as the tongue of a butterfly. Other people in young Moncho's world include his down-to-earth mother (Uxia Blanco), his Republican father, and his older brother, who plays the saxophone with a group of local musicians. However, when the Fascists roll into town, the boy's life changes forever. La Lengua de las Mariposas was screened at the 1999 San Sebastian Film Festival.

Eva Maria Fernández
as Neighbour No. 1

Feli Manzano
as Neighbour No. 2

Golfo
as Tarzan
View All

Because the film marches so inexorably toward its conclusion, it would be unfair to hint at what happens, except to say that it provides a heartbreaking insight into the way that fear creates cowards.

Elegant and astonishing in its powerful simplicity.

The real tragedy is the death of a liberal education.

A bitterswet coming-of-age drama about the ways in which paranoia can stifle our courage, sanity, and love.

José Luis Cuerda's film is filled with easy metaphors, as subtle and delicate as a butterfly's wing.

Has a delicate beauty about it, but its fragility becomes its ultimate undoing.

A European import teaches us how simple and beautiful film can be. `Butterfly' or `Butterfly Tongues' (in some US markets) tells the delightful story of Moncho, a young boy's coming of age as his world opens up through the eyes of his beloved teacher, Don Gregorio. As the teacher brings the boy into the fascinating world of butterflies, the boy begins to emerge from his cocoon. But looming on the horizon is the surgence of a fascist regime that threatens to unravel their innocent world. In the summer of 1936, which is when the films takes place, the whole of Spain was intertwined in the struggle between the Mussolini inspired Nationalist Party and the Republicans. But as the rest of Europe was being over run by a couple different fascist regimes, Spain was trying desperately to prevent that outcome. The film `Butterfly' brings in these elements and lets these two main characters deal with the impending doom and the heart-breaking aftermath. The film also beautifully depicts these simple folks who are desperately trying to find their way in the world. From one side you have the teacher who is just trying to bring peace to his students and their world. And on the other a young boy trying to understand the gigantic world around him. The teachings of the butterflies are a metaphor for the change coming in Spain and in both of their lives. This metaphor rings cleverly through each character in the film which does beg the question did the teacher know about the coming conflict and was trying to say something subtly. After watching this film, I learned the character of Don Gregorio was played by a legendary Spanish actor named Fernando Fernan Gomez. I could see even before I knew who he was that this man is amazing. I haven't seen this kind of subtle grace since Sir John Gielgud. I wish I had a teacher like him in my life. 5 Stars 6-22-13

A wonderful (but tragic) story about a very bright but fragile little boy from a conservative family and the strength and courage that he gets from his very kind and exceptionally wise teacher, who is more liberal minded.

A heartbreaking microcosmos of spain's socio political situation in the eve of their civil war. told with serenity and wisdom.