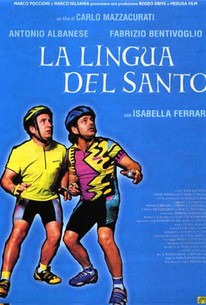 A pair of would-be criminals get more than they bargained for during a robbery of a Catholic church in this satiric comedy from Italy. Willy (Fabrizio Bentivoglio) is a salesman who has been fired from his job, while his friend Antonio (Antonio Albanese) is a football player whose career has hit the skids. Short on money and with no immediate prospects, Willy and Antonio decide to steal the donation box at a church in a prosperous neighborhood. The burglary turns disastrous, but as they flee, Antonio grabs a jeweled curio, which turns out to be a holy relic containing the tongue of Saint Antonio, the patron saint of the humble and needy. Thinking he may have found a gold mine, Antonio demands a ransom from the Vatican in exchange for the safe return of the tongue. When the church refuses to pay, the novice thieves pry some of the rubies from the relic and try to sell them to a pack of gypsies. But the gypsies turn out to be big fans of Saint Antonio, and are horrified when they discover the source of the jewels. Krondano (Toni Bertorelli), the gypsy leader, takes the story of the stolen relic to the media, who have a field day with it, and Maritan (Giulio Brogi), a successful businessman who believes he owes his good fortune to Saint Antonio, steps forward to offer a bounty for the safe recovery of the saint's tongue. ~ Mark Deming, Rovi

Giulio Brogi
as Maritan
View All

There are no critic reviews yet for La Lingua del Santo (Holy Tongue). Keep checking Rotten Tomatoes for updates!

There are no featured reviews for La Lingua del Santo (Holy Tongue) at this time.