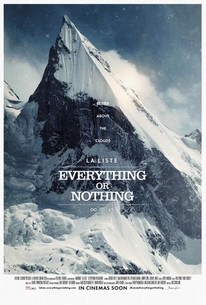 Back in 2016, free-skier Jérémie Heitz compiled a list of some of the most daunting and iconic peaks in The Alps', to then freeride down them at record speeds. Having developed a taste for adrenaline, the Swiss skier, known amongst his peers as the fastest free-skier in the world, collaborates with his close friend Sam Anthamatten to set off on an ambitious new endeavor, that will take them across the world. The plan is simple, but by no means safe, as the duo write up a new shortlist, this time of some of the most awe-inspiring, intimidating mountain ranges on Earth, finding high-altitude peaks that surpass 6000m, taking the notion of steep-skiing to a whole new level, and redefining what it means to be a free-rider. On this journey, which takes them from the Andes mountain range in Peru, to the Karakoram in Pakistan, Jérémie and Sam set off on the trip of a lifetime. Though what goes up, must come down -- and in their case, it does so at a frightening pace. This documentary joins them on their mission, as they strive to show off the natural beauty of the landscapes, the grace of the skiing, but conversely, the dangers that come with it -- as they test the boundaries of human possibility. For these two men the scenario really is simple: it's everything or nothing, and it seems like there's rather little in between.

Critic Reviews for La Liste: Everything or Nothing

There are no critic reviews yet for La Liste: Everything or Nothing. Keep checking Rotten Tomatoes for updates!

There are no featured reviews for La Liste: Everything or Nothing at this time.

La Liste: Everything or Nothing Quotes