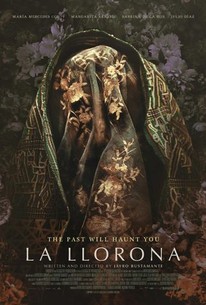 Critics Consensus: La Llorona puts a fresh spin on the familiar legend by blending the supernatural and the political to resolutely chilling effect.

Critics Consensus: La Llorona puts a fresh spin on the familiar legend by blending the supernatural and the political to resolutely chilling effect.

Critic Consensus: La Llorona puts a fresh spin on the familiar legend by blending the supernatural and the political to resolutely chilling effect.

Indignant retired general Enrique finally faces trial for the genocidal massacre of thousands of Mayans decades ago. As a horde of angry protesters threatens to invade their opulent home, the women of the house--his haughty wife, conflicted daughter, and precocious granddaughter--weigh their responsibility to shield the erratic, senile Enrique against the devastating truths being publicly revealed and the increasing sense that a wrathful supernatural force is targeting them for his crimes. Meanwhile, much of the family's domestic staff flees, leaving only loyal housekeeper Valeriana until a mysterious young Indigenous maid arrives.

TV Premiere Dates 2020
The Indie Fresh List: An American Pickle, I Used to Go Here, and La Llorona
10 Horror, Sci-Fi, and Genre Films That Blew Minds at TIFF – And Will Be Coming to You Soon

"La Llorona" avoids the tropes of horror... Instead, this smart and elegant film feels like a languid bit of cinematic magical realism where strange things happen - and the real horror lies not in the supernatural but in the savage acts of men.

What I love about this film is the way it blends genres... It has everything you expect in a horror movie -- things that go bump in the night -- but in this much more sophisticated way.

What stands out about the film is the pain that lies underneath Bustamante's placid compositions-an anguished desire for justice that, like the Weeping Woman herself, still cries out to be heard.

It's not just a creepy story, but a painful reflection of injustice.

With precise framing, compositional flair and a steady hand, Bustamante layers the story, adding daubs that suggest rather than explain.

A solemn and gripping tribute to real-life atrocities.

La Llorona is a twist on the legendary tale and figure, one which haunts viewers not with blood, guts and jump scares but with the omnipotence of history and the pain of its many victims. Incredible.

The cast has an unprecedented chemistry that is held together by actress Maria Mercedes Coroy and her incredible on screen presence.

You might think La Llorona is building to something similar, except...it doesn't. The film builds and builds, but the pay-off feels underwhelming. Perhaps even disappointing.

A horror movie with a political touch that just feels relevant and very well placed. [Full review in Spanish].

Bustamante's La Llorona is a bold assertion of the embedded prejudice against indigenous populations in his home country of Guatemala while also asserting that women and children in particular bore the brunt of the violence.

There are no featured reviews for La Llorona at this time.