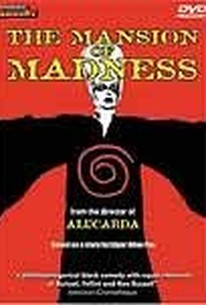 This bizarre Mexican production is loosely based on The System of Dr. Tarr and Professor Feather by Edgar Allan Poe. The story involves a visit from a newspaper reporter (Claudio Brook) to a sanitarium in 19th century France, where he eventually comes to realize the asylum is being run by one of its own inmates, a megalomaniac, who allows the others to play out their basest fantasies and urges. More stylish and creative than its exploitative American-release title implies (the original Mexican title translates as Mansion of Madness), this is an interesting surrealist spin on the Poe tale from the producers of Jodorowsky's El Topo. ~ Cavett Binion, Rovi

There are no critic reviews yet for The Mansion of Madness (Edgar Allan Poe: Dr. Tarr's Torture Dungeon). Keep checking Rotten Tomatoes for updates!

After helping produce Fando & Lis and El Topo, Moctezuma made his first film, The Mansion of Madness. While not a great film, it has its points of interest. More of a series with strange scenes, odd moments and surrealist visions of mad people doing weird things. The first act is painfully slow and unlike the director's later film ALUCARDA, the film doesn't kick off with bizarre visuals and horror elements. The technical bits of the movie, such as the camera trying really hard to be creative with oddly framed shots, are as bad as the script and performances. Although I do like my oddities when it comes to strange films, this one was just a little too "Far fucking out, man" for me.

It's not hard to believe that the director of this also collaborated with Jodorowsky. A crazy and inventive film that at times will make your jaw drop.