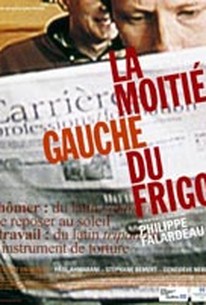 Christophe agrees to be filmed by his roommate Stéphane, while he is searching for a meaningful engineering job. Since he voluntarily resigned his job when he was to be moved to quality control, he does not get unemployment benefits, and goes to classes on how to contest the decision. Christophe sells his car, while Stéphane receives more funding for the film, and can hire a sound man. However, the crew following Christophe with a camera is a hinderance in his job-hunting. After spending the night with Christophe, his girlfriend Odile, an artist working as a supermarket cashier, takes over the camera and films the roommates as they get up. Finally Christophe finds a few days work dismantling machines for a company that is moving to Mexico, but his cameraman causes problems after interviewing the president of the company in the washroom.

There are no critic reviews yet for La Moitié gauche du frigo (The Left-Hand Side of the Fridge). Keep checking Rotten Tomatoes for updates!

There are no featured reviews for La Moitié gauche du frigo (The Left-Hand Side of the Fridge) at this time.