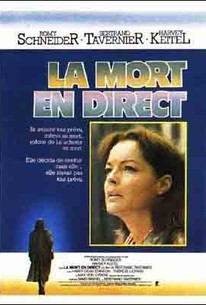 Director Bertrand Tavernier provides an unexpected feminist slant to the otherwise standard sci-fi trappings of Death Watch. Harvey Keitel plays a man of the future who has had a camera implanted in his brain. The mechanism, which is endowed with special X-ray properties, is activated by the user's eyes. Keitel is assigned by ruthless TV producer Harry Dean Stanton to secretly probe the subconscious of a dying woman, played by Romy Schneider. Stanton is only interested in the grim spectacle of what goes on inside the brain of someone who knows she's doomed. Keitel, on the other hand, becomes increasingly compassionate--and disgusted by the tawdriness of his assignment--as he stares into Schneider's tortured psyche. ~ Hal Erickson, Rovi

Caroline Langrishe
as Girl in the Bar

At almost two overwritten hours of overacting, it's a long time dying.

It is a prescient but lugubrious sci-fi satire about reality television, though a more low-key satire can hardly be imagined.

While it may be conceptually rooted in science fiction, 'Death Watch' is essentially melodramatic in tone and execution: it was shot in late '70s Glasgow with not a shiny jumpsuit or flying car in sight.

Tavernier slips in subtle touches that seem meaningless and would normally have a big circle around it and an arrow pointing at it and saying "look at me, I'm important," but instead reinforce the droning, impersonal nature of this particular society.

It's an exciting tale about self-respect and personal autonomy in a society where privacy and personal identity are being steadily eroded and it's as topical today as when it was made.

Much like Lumet's Network, Death Watch grows only more unsettling as the years pass.

So deliriously improbable is its blend of contributing elements, and so prescient is its peculiar version of the future, that you can almost forgive this curio the rather tepid character drama that holds together all its odd particulars.

It's let down by preachy dialogue, but makes striking use of the Scots locations.

Its plot is a credibility stretch even in these days of de rigueur media paranoia, and its relentlessly murky, moody tone might raise the odd giggle, but Tavernier's long-neglected sci-fi curiosity is compelling nonetheless.

More of a drama than one would expect from the plot summary, this is a great little film that probably rings truer today than when it was made, which made it seem like a sci fi.