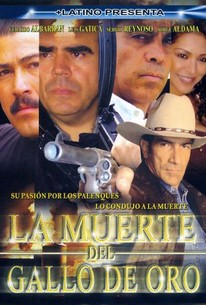 They called him the Golden Roster because of his grand hits at the Palenques, but a sex addicted women full of passion and a powerful drug lord full of jealousy faces off with the Golden Roster, killing his loved one and leaving a blood trail that will only haunt him at the end. This all star cast includes: Gerardo Albarran (Codigo Postal), Luis Gatica (Rubi), Sergio Reynoso (Barrera De Amor), Siena Perez Cano (Duelo De Pasiones), Alfonso Munguia, Jorge Aldama, and many more.

There are no critic reviews yet for La Muerte del Gallo de Oro. Keep checking Rotten Tomatoes for updates!

There are no featured reviews for La Muerte del Gallo de Oro at this time.