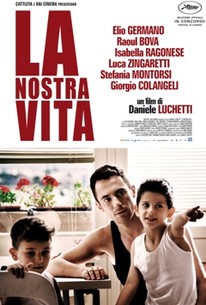 A man struggling to get ahead and provide for his family takes some unscrupulous turns that come back to haunt him in this drama from filmmaker Daniele Luchetti. Claudio (Elio Germano) has worked in construction much of his adult life and is looking for an opportunity to move into contracting. Claudio is passionately in love with his wife Elena (Isabella Ragonese), but while he's emotionally shattered when she died in childbirth, it isn't long before he begins burying his emotions in his professional life. While working on a project for his boss Porcari (Giorgio Colangeli), Claudio finds the body of an illegal immigrant from Romania who was working off the books as a security guard, and Claudio persuades Porcari to give him a subcontracting assignment in exchange for keeping quiet about the dead man. Needing a cheap work crew to put up a building, Claudio borrows money from Ari (Luca Zingaretti), who has made a small fortune in several illegal enterprises, and hires a handful of illegal aliens to help with the construction. But before long, the inexperience of the workers puts Claudio behind schedule, and he's paid a visit by Gabriela (Alina Madalina Berzunteanu), a woman from Romania looking for her missing husband -- the same man whose body was found by Claudio. La Nostra Vita (aka Our Life) was an official selection at the 2010 Cannes Film Festival.

Emiliano Campagnola
as Vittorio
View All

The result is a blandly schizophrenic melodrama.

Even Germano's charismatic performance leaves the impression that, when you get down to the core of human behaviour, a conscience is far less helpful than a talent for charm.

In the end, loose ends are tied up implausibly, and Claudio learns an important lesson (you know he does, because he has the second of his two emotional scenes in the movie).

There are no featured audience reviews yet. Click the link below to see what others say about La Nostra Vita (Our Life)!