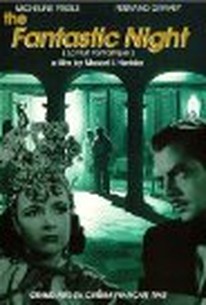 Originally titled La Nuit Fantastique, this French romantic farce was filmed in 1942, during the Nazi occupation. Little did the Germans suspect that star Fernand Gravey was spending his "leisure" time serving with the French Secret Army on behalf of the Resistance. In the film, Gravey plays a medical student, while the luscious Michelene Presle is the girl of his dreams. In fact, it is during one of his dreams that he rescues the girl from a Byzantine plot to rob her of her fortune. It's hardly surprising that French audiences would respond to escapist fare like this while the Germans patrolled their streets outside the theater. Fantastic Night finally received U.S. bookings in 1949, by which time Michelene Presle was preparing to make her first Hollywood film. ~ Hal Erickson, Rovi

Micheline Presle
as The girl

Bernard Blier
as The cadet

There are no featured audience reviews yet. Click the link below to see what others say about La Nuit Fantastique (Fantastic Night)!