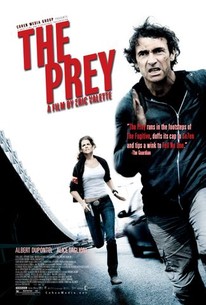 Franck Adrien (Albert Dupontel), a bank robber convicted of a heist and sentenced to six months in prison, shares a cell with seemingly weak Jean Louis Morel. But once Morel gets released from behind bars, Adrien learns that Morel is really a sadistic serial killer who now knows private details about Adrien's life. Adrien must break out of prison and catch Morel before he gets to Adrien's family...and before France's elite police detectives hunt Adrien down. (c) Cohen Media

Olivier Schneider
as Novick
View All

Deftly strips away the phoniness of a big-budget studio production.

It's watchable but absolutely no big deal, although you wouldn't know that from the drum-heavy score, so loud and militaristic that someone could reuse it for a documentary about the Battle of the Bulge.

Like a bullet train, the French thriller "The Prey" is a model of breathless efficiency, its stuffed cargo of chases, brawls and twists delivered with admirable speed.

It's no insult to say that it doesn't aspire to art-house significance, just to white-knuckled entertainment.

The Prey plays like a fast and loose dime store novella, an appetizer that leaves you wishing for something more substantial, but has enough charm to coast by on.

... gorgeous and insane, and really enjoyable - all the way through the terrifying end.

Eric Valette tries to keep it grounded in action scenes built on a physicality that is more authentic than the overkill of CGI spectacle.

"The Prey" is an above-average French-language thriller full of suspense and interesting characters.

Why can't we make beaucoup genre films as frequently as the French?

As cynical as you want it to be, 'The Prey' is an often violent, strong character-driven, somewhat thrilling story where nobody is to be trusted nor aided without suffering the consequences.

There are no featured audience reviews yet. Click the link below to see what others say about La proie (The Prey)!