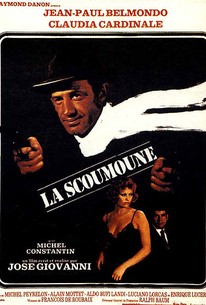 In 1934, Roberto Borgo (Jean-Paul Belmondo) leaves Sicily for Marseille, where his childhood friend Xavier (Michel Constantin) has just been condemned to 20 years in prison for a crime he didn't commit. Indeed, local gang leader, Villanova, has framed Xavier. Roberto confronts the mobster and kills him. Later, while helping Xavier's sister (Claudia Cardinale) to fight an American gang of racketeers, Roberto is caught by the police and is put in the same prison with Xavier. Then the two volunteer to clear land mines left from the last war, hoping to receive a pardon. The same story was previously filmed as Un nommé La Rocca also starring Belmondo. ~ Yuri German, Rovi

Alain Mottet
as Ficelle
View All

There are no critic reviews yet for La Scoumoune (Hit Man)(Mafia Warfare)(The Pariah). Keep checking Rotten Tomatoes for updates!

There are no featured reviews for La Scoumoune (Hit Man)(Mafia Warfare)(The Pariah) at this time.