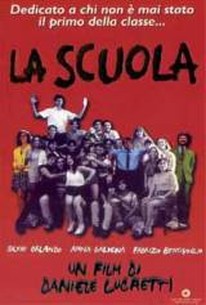 This intelligent Italian comedy centers on an academically and physically run-down school and is presented from the viewpoint of the teachers. The main character is Vivaldi, who passionately believes that the purpose of education is to allow students to creatively express themselves. To this end, he comes up with all sorts of crazy ways to enliven his history class so that the students will pass their final exams. On the other side, is Sperone, a dour disciplinarian who inspires fear in all who encounter him. Vivaldi is romantically interested in the comely physics teacher Majello, but apparently she and Sperone are having a hot affair. The reasons for Vivaldi's assumption are made clear during a flashback. On the final day of the school year, the situation comes to a rapid boil as Majello has had a major fight with her husband, Sperone is bitterly disappointed, and Vivaldi desperately tries to pass a student who spends the entire day imitating a fly. ~ Sandra Brennan, Rovi

Roberto Nobile
as Mortillaro
View All

There are no critic reviews yet for La Scuola (School). Keep checking Rotten Tomatoes for updates!

There are no featured reviews for La Scuola (School) at this time.