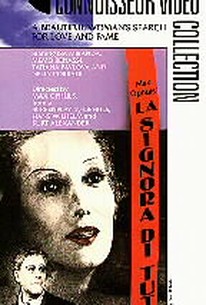 Max Ophuls' La Signora di Tutti can be regarded today as a dress rehearsal for his 1955 masterpiece Lola Montes, though it comes nowhere near the brilliance of that later classic. Isa Miranda stars as a famous actress who, in the opening scenes, attempts suicide. A series of lavish flashbacks details the events leading up to her cataclysmic decision. In her heyday, the actress' haunting beauty was enough to drive men mad--and some to the point of killing themselves. Modern audiences may have trouble keeping a straight face during some of the more heated passages, but Ophuls' basic premise--that fame and celebrity are ultimately hollow entities--is not to be taken lightly. The director's fabled camera techniques help smooth over some of the rougher and more ludicrous passages. La Signora di Tutti represents Max Ophuls' sole participation in the fascist-dominated Italian film industry of the 1930s. ~ Hal Erickson, Rovi

There are no featured reviews for La Signora di Tutti at this time.