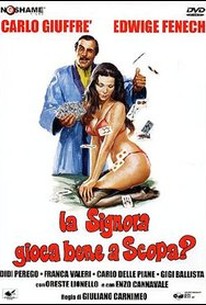 A down on his luck gambler goes to work for a pair of wealthy, and lusty, female admirers only to discover that his chores include much more than simple housework. Michele (Carlo Giuffrè) knows how to handle his cards, but lately he's been stuck on a losing streak. Informed by his friend and advisor Peppino (Enzo Cannavale) that his debts have superseded his earnings, Michele sells shoes just to get by. But as good as Michele is at handling cards, he handles women even better. Giulia and Monica are two of his biggest admirers, and they're willing to pay him to perform odd jobs around their mansion. But their idea of odd jobs include getting Michele to pose for nude paintings, and summoning him to the barn for a roll in the hay. Before long, Michele's libidinous new employers are working him around the clock. ~ Jason Buchanan, Rovi

There are no critic reviews yet for La Signora gioca bene a scopa? (Poker in Bed). Keep checking Rotten Tomatoes for updates!

There are no featured reviews for La Signora gioca bene a scopa? (Poker in Bed) at this time.