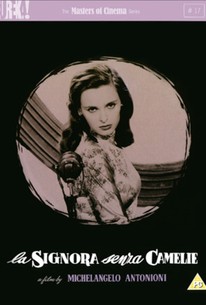 Signora Senza Camelie (Lady without Camelias or Camille without Camelias) was the third feature-length directorial effort by Michelangelo Antonioni. It is possible that the director invested a great deal of himself in the story's central character, a film producer played by Gino Cervi. Turning shopgirl Clara Manni (Lucia Bose) into a major movie star, Ercole "Ercolino" (Cervi) caps this Svengalilike action by marrying the girl. Her head in the clouds, Clara demands that her husband star her in an "artistic" production, rather than the sexy vehicles in which she's previously appeared. When the film bombs, so does the marriage. The film ends with a backhanded paean to "public taste," a commodity Antonioni seldom bothered himself with in his future films.

Laura Tiberti
as Renata
View All

Antonioni, who wrote the story and co-wrote the script, offers a sardonic view of filmmaking that ranges from crudely pandering screenplays and sordid rehearsals of love scenes to the pathos of extras desperate for a day's pay.

I thought Lady very weak, with little hint in it of the Antonioni to come, which was surprising because even earlier Antonioni, Story of a Love, seemed stranger and more prophetic of the giant en route.

Perhaps the most unjustly neglected of Michelangelo Antonioni's early features.

The resulting cocktail is slight on psychology, but invariably stunning to behold.

If it lacks the final fusion of purposes characterizing a masterwork, [the film] is nevertheless so unmistakably and remarkably the work of a master that one is shocked to discover the rather cursory critical treatment it has generally been accorded.

One of the better early films of Michelangelo Antonioni.

An impeccable early scene has Antonioni defining mise-en-scène before your eyes -- a torrid kiss is rehearsed on a bed, the camera dollies in and the sketch becomes a fresco, with off-screen whispers acting as meta-reminders.

Although casting a dismissive eye over the Cinecittá ballyhoo, Antonioni is more concerned with the psychological impact of Bosé's lonely predicament.

Antonioni's exquisite film is obviously a comment on the fickle nature of his chosen industry, but more importantly (considering the nature of his subsequent work) a formative parable on society's unsustainable expectations of women.

There are no featured reviews for La Signora Senza Camelie at this time.