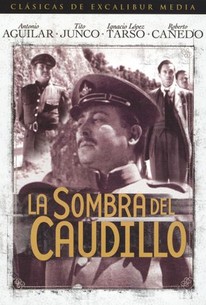 When a retiring military leader is forced to choose his successor, his selection clashes with popular opinion and finds a conflicted general weighing his loyalty to his country against his desire for power in this drama from director Julio Bracho. Though the departing leader has clearly chosen current Minister of Interior General Jiminez to assume power upon his departure, the public makes their desire clear to have Minister of War General Aguirre as their leader, throwing an unexpected wrench in the transition. Despite removing himself from contention in hopes of diffusing the situation, General Aguirre is dogged by his loyal supporters to stay in the running. To go against government policy and assume power would mean breaking his loyalty to the country he has served for so many years, but the lure of great power may be too much to resist.

The greatest political thriller in the history of Mexican cinema.

There are no featured reviews for La sombra del Caudillo at this time.