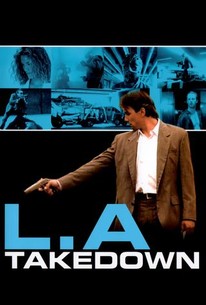 Producer/director Michael Mann, kappelmeister of the trendy TV series Miami Vice, tried to impose his MTV mentality on Tinseltown with L.A. Takedown. Los Angeles cop Scott Plank is on the trail of master thief Alex McArthur. After McArthur pulls off "the score of a lifetime," the crook and the cop spend the rest of their screen time in a deadly game of one-upsmanship. The usual Michael Mann trademark of style over substance prevails throughout L.A. Takedown. But the vogue had passed, and this TV pilot film failed to graduate into a series.

Xander Berkeley
as Waingro
View All

...although L.A. Takedown is about half the length of Heat, the movie feels so much longer and poorly-paced than its big-screen successor...

A film much better written than executed... has the appearance at every moment of a hatchet job that got cranked out in record time because nobody involved had any real desire to make it.

There are no featured audience reviews yet. Click the link below to see what others say about L.A. Takedown!