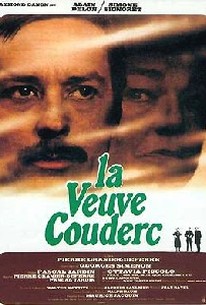 The Widow Coudere (original French title: La Veuve Coudere) is adapted from a Georges Simenon story. Set in 1934, the plot involves widowed Simone Signoret, who is plagued by nasty in-laws who want her to leave her home and give up her inheritance. Signoret counters their meanness with the will of strength rather than hate. Alain Delon plays a wounded escaped murderer, who is sheltered by Signoret and becomes her ally in her battle against her in-laws. The family refuses to believe the widow's claim that Delon is a new servant, and summon the police. The film ends in a hail of bullets, with kindred spirits Delon and Signoret united in Eternity.

Delon is deliciously mysterious and remarkably understated and Signoret is a woman bursting with anger, pent up sexual energy, bravery, and grace. She adds so much nuance to an already well-written role.

A contemplative narrative, one more concerned with raising questions than presenting answers. The acting is top notch, with Delon and Signoret in peak form.

There are no featured reviews for La veuve Couderc (The Widow Couderc) at this time.