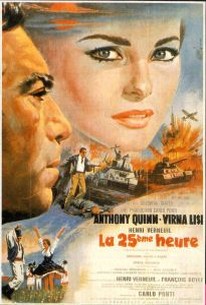 Adapted from the novel by C. Virgil Gheorghiu, this satirical concentration-camp drama from Turkish-born French director Henri Verneuil stars Anthony Quinn as Johann Moritz, a Romanian peasant who experiences the horrors of World War II when the Nazis invade his country. Because local police chief Dobresco (Gregoire Aslan) is anamorous towards Moritz's wife Suzanna (Virna Lisi), he has the lowly fieldhand falsely labeled a Jew and sent to a work camp. Moritz's troubles continue to mount, as his wife is threatened with losing their property unless she divorces him. Also starring Michael Redgrave, La Vingt-cinquième heure is also known as The 25th Hour, though it should not be confused with and bears no resemblance to the 2002 Spike Lee film of the same name. ~ Matthew Tobey, Rovi

The 25th Hour has all the surface characteristics of a great movie but its greatness is only skin deep. It nags rather than indicts.

There are no featured reviews for La Vingt-cinquième heure (The 25th Hour) at this time.