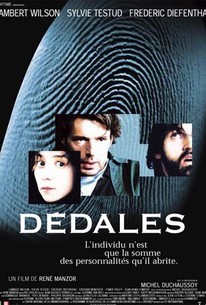 The psychological thriller Dedales (Labyrinth), written and directed by René Manzor, concerns a psychiatrist treating a serial killer. Frederic Diefenthal portrays a police investigator with ESP who eventually plays a part in arresting Claude (Sylvie Testud), an unhinged woman who allows random chance to dictate her actions. Investigators believe Claude has been responsible for the deaths of nearly 30 people. When her first psychiatrist (Michel Duchaussoy) is unable to make headway, he brings in his colleague Brennac (Lambert Wilson). Brennac eventually discovers the key to his patient's split personalities, many of which have a basis in Greek mythology, but the surprising ending alters the audience's perceptions of what has happened in the film.

There are no critic reviews yet for Labyrinth (Dédales). Keep checking Rotten Tomatoes for updates!

There are no featured audience reviews yet. Click the link below to see what others say about Labyrinth (Dédales)!