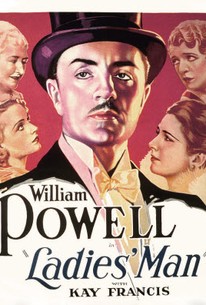 A Rupert Hughes novel was the source for this soulless but sophisticated comedy-drama. William Powell is a charming roue who lives off the gifts given to him by lonely married women. In exchange, he escorts them around town (among other services) when their husbands aren't looking. The only woman Powell truly cares about is Kay Francis, who is disgusted by her lover's lifestyle. The daughter (Carole Lombard) of one of Powell's married companions falls for the rakish gentleman--which results in tragedy when Lombard's father seeks revenge for the ruination of his family. Ladies' Man is definitely no relation to the 1961 Jerry Lewis comedy of the same name.

Clarence Wilson
as Jeweler
View All

There are no critic reviews yet for Ladies' Man. Keep checking Rotten Tomatoes for updates!

There are no featured reviews for Ladies' Man at this time.