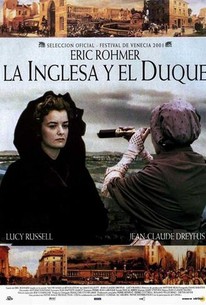 Critics Consensus: Visually stunning, The Lady and the Duke uses current technology to elegantly bring the past to life.

Critics Consensus: Visually stunning, The Lady and the Duke uses current technology to elegantly bring the past to life.

Critic Consensus: Visually stunning, The Lady and the Duke uses current technology to elegantly bring the past to life.

The Lady and the Duke Photos

Having finished his acclaimed cinematic quartet "Contes des quatre saisons," legendary filmmaker Eric Rohmer takes DV camera in hand to recreate this idiosyncratic period piece adapted from the Grace Elliot memoirs. Concerned with faithfully evoking 18th century France, Rohmer uses two strategies -- using only eyewitness accounts of the times and avoiding all external settings, arguing that Paris now is a completely different city than it was during revolutionary times. The story revolves around Grace Elliot (Lucy Russell), a Scottish aristocrat stranded in Paris during the French Revolution. She is once again thrown together with Philippe Egalite, the cousin to the king, the Duke of Orleans, and Grace's former lover. Their friendship remains complicated and uncertain, and is made all the more complex by the rush of events around them. This film was screened at the 2001 Toronto Film Festival.

Daniel Tarrare
as Justin the Doorman

Critic Reviews for The Lady and the Duke

Leave it to Rohmer, now 82, to find a way to bend current technique to the service of a vision of the past that is faithful to both architectural glories and commanding open spaces of the city as it was more than two centuries ago.

Seldom has the elegant past of 18th century royal life married modern filmmaking with the grace and sophistication of Eric Rohmer's L'anglaise et le duc.

Nothing short of a technical marvel and a ravishing movie to look at.

Whenever the subtleties of political morality get a bit overbearing, there's a respite in the painterly streets of Paris, where, we are reminded, the past was another city, strange and resistant to present-day adornments.

I loved the look of this film.

A bold (and lovely) experiment that will almost certainly bore most audiences into their own brightly colored dreams.

Though not one of Rohmer best films, it's worth seeing for the acting and the dialogue which magnify the glory of the French language. Amazingly, at 81, Rohmer continues to be productive; rejection of film by Cannes Festival stirred controversy in 2001

Who would have thought that in the year of Spider-Man and Attack of the Clones, the year's most innovative use of special effects would come in a film about the French Revolution?

At 135-minutes, this stream-of-facts lecture trembles into the trenches of monotony without the detraction of technology.

My problem with The Lady and the Duke is not Rohmer's ostensibly pro-Royalist politics, but his now reactionary aesthetics.

Rohmer's novel, exhilarating and elegant work with painted scenery and digital equipment is a revelation. But this work is stuck in a film in which the foreground action is sleep-inducing by comparison.

Audience Reviews for The Lady and the Duke

Period piece misses the mark. The film makers probably realized it was a disaster but knew someone would always be interested in period pieces..so they took their chances. Not worth the effort to find.

The Lady and the Duke Quotes