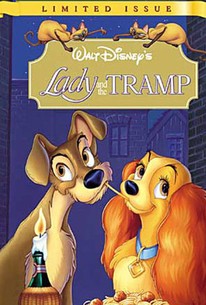 Critics Consensus: A nostalgic charmer, Lady and the Tramp's token sweetness is mighty but the songs and richly colored animation are technically superb and make for a memorable experience.

Critics Consensus: A nostalgic charmer, Lady and the Tramp's token sweetness is mighty but the songs and richly colored animation are technically superb and make for a memorable experience.

Critic Consensus: A nostalgic charmer, Lady and the Tramp's token sweetness is mighty but the songs and richly colored animation are technically superb and make for a memorable experience.

Lady and the Tramp Videos

Lady and the Tramp Photos

Lady and the Tramp represented two "firsts" for Disney: It was the studio's first Cinemascope animated feature, and it was their first full-length cartoon based on an original story rather than an established "classic". Lady is the pampered female dog belonging to Jim Dear and Darling. When her human masters bring a baby into the house, Lady feels she's being eased out; and when Darling's insufferable Aunt Sarah introduces her nasty twin Siamese cats into the fold, Lady is certain that she's no longer welcome. The cats wreak all manner of havoc, for which Lady is blamed. After the poor dog is fitted with a muzzle, Lady escapes from the house, only to run across the path of the Tramp, a raffish male dog from the "wrong" side of town. The Tramp helps Lady remove her muzzle, then takes her out on a night on the town, culminating in a romantic spaghetti dinner, courtesy of a pair of dog-loving Italian waiters. After their idyllic evening together, Lady decides that it's her duty to protect Darling's baby from those duplicitous Siamese felines. On her way home, Lady is captured and thrown in the dog pound. Here she learns from a loose-living mutt named Peg that The Tramp is a canine rake. Disillusioned, Lady is more than happy to be returned to her humans, even though it means that she'll be chained up at the insistence of Aunt Sarah. Tramp comes into Lady's yard to apologize, but she wants no part of him. Suddenly, a huge, vicious rat breaks into the house, threatening the baby. Lady breaks loose, and together with Tramp, runs into the house to protect the infant. When the dust settles, it appears to Aunt Sarah that Tramp has tried to attack the child. That's when Lady's faithful friends Jock the bloodhound and Trusty the scottie swing into action, rescuing Tramp from the dogcatcher. Once Jim Dear and Darling are convinced that Tramp is a hero, he is invited to stay...and come next Christmas, there's a whole flock of little Ladies and Tramps gathered around the family. Beyond the usual excellent animation and visual effects, the principal selling card of Lady and the Tramp is its music. Many of the songs were performed and co-written by Peggy Lee, who years after the film's 1955 theatrical issue, successfully sued Disney for her fair share of residuals from the videocassette release. ~ Hal Erickson, Rovi

News & Interviews for Lady and the Tramp

View All Lady and the Tramp News

Critic Reviews for Lady and the Tramp

The quintessential American love story -- the one between the spoiled heiress and the spontaneous, fun-loving guy from the wrong side of the tracks -- has seldom been more elegantly and entertainingly told.

Walt Disney has for so long parlayed gooey sentiment and stark horror into profitable cartoons that most moviegoers are apt to be more surprised than disappointed to discover that the combination somehow does not work this time.

The wider canvas and extra detail work reportedly meant an additional 30% in negative cost. It was a sound investment.

The sentimentality is mighty, and the use of the CinemaScope size does not make for any less awareness of the thickness of the goo.

Ranking the Disney animated features is an exercise in futility along the lines of ranking David Bowie singles or ranking Edgar Allan Poe stories: Everyone has their own personal favorites. In the case of Disney, my vote goes to Lady and the Tramp.

It might not be Disney's most impressive work, but it's still expertly designed, quite satisfying, and highly memorable for its key romantic sequences.

I just love Lady and the Tramp.

While Lady and the Tramp may not rank as one of Disney's greatest animated works, it still makes for a charming experience thanks to its memorable and entertaining characters, gorgeous animation, and a beautiful score.

50th anniversary edition of the class story of two very different dogs who fall in love.

This tale (oh hah hah!) of two canines in love has withstood the test of time to remain a family classic.

Audience Reviews for Lady and the Tramp

Make sure you watch the original CinemaScope widescreen version of this great Disney animation and be charmed by its stunning, vivid colors, sweet songs, adorable characters and that memorable spaghetti scene that conveys all the romance of the "lovely bella notte."

Imagine a Youtube video about kittens or puppies or otters or bunny rabbits or baby whales being cute (where is the video about baby piranhas being cute?) and you've pretty well described this 80 minutes of Disney kisses and song. Its not terribly offensive (well, there is the Siamese cats being inscrutably Asian and duplicitious) and I didn't hate myself for watching it. I don't think you will either.

One of my favourite classic Disney pictures. Not only is the story one of the greatest and most true to life, but the visuals are beautiful, which is a perfect match, considering the overall film is nothing but gorgeous storytelling. As a family gains a puppy, the grows up, the family has a baby, and the puppy is left behind. That's when the story begins to follow Lady, whom finds friends along the way and a lost lover who will show her the "stray" ropes along the way. Everything about this film is perfect, I would not change a thing. Easily one of Walt Disney's the best!

Lady and the Tramp Quotes