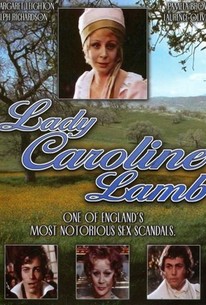 Robert Bolt's historical drama, set in England during the 19th century, is an account of Lady Caroline (Sarah Miles), wife of a Parliament member (Jon Finch) who begins a notorious affair with Lord Byron (Richard Chamberlain).

Laurence Olivier
as Duke of Wellington

Felicity Gibson
as Girl In Blue

The result is a creakingly old-fashioned costume melodrama splattered with historic facts that succeed only in clashing with the fiction.

Whatever else it may fail at, Lady Caroline Lamb is a theatrical motion picture, which is more than can be said about some other current features that should have gone directly to the Late Show.

There are no featured audience reviews yet. Click the link below to see what others say about Lady Caroline Lamb!