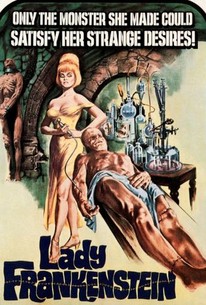 This lurid but entertaining Italian/Spanish twist on the Frankenstein legend begins with Baron Frankenstein (Joseph Cotten) being assisted in his research by his sultry daughter Tania (Sara Bay). The doctor's first attempt at a stitched-together creation results in a lumpy, pop-eyed monstrosity with little of the expected respect for its creator. In fact, the monster begins its rampage by murdering the Baron and escaping into the surrounding village. The younger Frankenstein returns from medical school with newly-acquired surgical expertise and a desire to follow in her late father's footsteps. She soon begins work on a creation of her own by transplanting the brain of her brilliant but deformed assistant Charles (Paul Müller) into the body of a brawny handyman. The result is a handsome and powerful male creature not only capable of destroying the original monster, but virile enough to satisfy his creator's overwhelming sexual appetites. Tania is apparently quite eager to test the latter, and she does quite frequently, as indicated in the film's numerous softcore sex scenes. This lengthy romantic interlude is cut short when the first monster returns to finish what he started. Directed by Mel Welles (who B-movie fans will remember as Gravis Mushnik from Roger Corman's cult classic Little Shop of Horrors), this film plays like a sexually-obsessed version of an early Hammer production.

Paul Whiteman
as The Creature

There are no featured audience reviews yet. Click the link below to see what others say about La Figlia di Frankenstein (Lady Frankenstein)(Daughter of Frankenstein)!