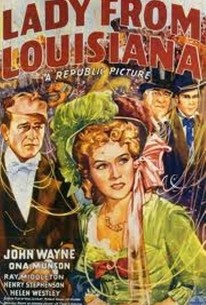 John Wayne goes up against the lottery racket, 1880 Louisiana-style, in this passable time-killer from Republic Pictures. Arriving from New England to look into the Louisiana lottery on behalf of uplifter Blanche Brunot (Helen Westley), attorney John Reynolds (Wayne) falls in love with sultry Julie Mirbeau (Osa Munson), who attempts to persuade him that her father's gaming business is on the up and up. When a New Orleans restaurateur, Gaston (Shimen Ruskin), is found murdered, Reynolds begins to suspect that General Mirbeau's (Henry Stephenson) gang is behind the killing. To meet the attorney halfway, Mirbeau fires his chief henchman, Blackie (Ray Middleton), but is himself killed by one of Blackie's men, Cuffy Brown (Jack Pennick). Reynolds, who has been appointed special city attorney, pays his respect to Julie, but the angry girl accuses him of indirectly causing the death of her father and then flaunts her engagement to Blackie. Said engagement, however, suffers a fatal blow when Julie finds her fiancé in the arms of gambling hall hostess Pearl (Jacqueline Dalya). Taking the stand in court against the racket, Julie's testimony is interrupted when a rainstorm sweeps the area, breaking a levee. While pursuing a fleeing Blackie, Reynolds orders a steamship to block the hole in the levee, a plan that ultimately saves New Orleans. Having survived the potential disaster, Julie leaves the lottery racket behind and agrees to become Mrs. Reynolds. ~ Hans J. Wollstein, Rovi

Critic Reviews for Lady from Louisiana (Lady from New Orleans)

Not much to like in this passable actioner, except for Wayne.

There are no featured reviews for Lady from Louisiana (Lady from New Orleans) at this time.