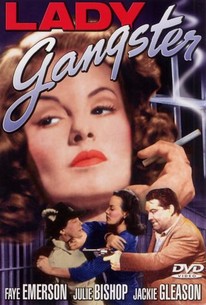 The direction of Warner Bros.' Lady Gangster is credited to one "Florian Roberts," who on closer examination turns out to be veteran helmsman Robert Florey, working pseudonymously. Faye Emerson plays the title character, aspiring actress Dot Burton, whose chance association with a gang of bank robbers leads inexorably to a life of crime. She eventually ends up in prison, where she participates in a break-out. Her regeneration comes about when she rescues Kenneth Phillips (Frank Wilcox), the only man who has ever shown her any kindness, from being rubbed out by the mob. The supporting cast includes Julie Bishop (who only a year earlier had been billing herself as Jacqueline Wells), and Jackie "C." Gleason, wasted in the role of a rotund henchman. Lady Gangter bears some traces of the 1932 Warner Bros. drama The Life of Vergie Winters.

This is the kind of movie you should only watch if you're in prison serving time.

A very interesting plot about an actress becoming a gangster, but the movie itself isn't that good. The only star you recognize is Jackie Gleason, who has a small role.

Average 40's crime drama plagued by a plot full of holes and a noticeable lack of star-power.