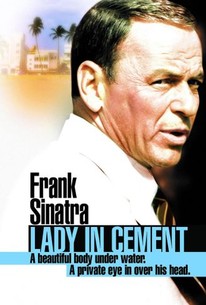 Tony Rome (Frank Sinatra) is a Miami private detective who discovers a lady in cement while scuba diving. Rome is hired by Gronsky (Dan Blocker) to find out if the woman is his missing girlfriend. He interviews Kit Forrest (Raquel Welch), a boozy socialite who had seen the woman at a drunken party earlier. Tony is warned by Kit's neighbor Al Munger (Martin Gabel) to stay away from Kit. Tony discovers Al is a former rackets boss and suspects there is more to the story than Kit and Al are letting on. With the help of local Lieutenant Santini (Richard Conti), Tony contacts artist Arnie Sherwin (Richard Deacon), who helps identify the dead woman as Gronsky's girlfriend. The plot thickens when Gronsky admits that he and Al's son Paul (Steve Peck) were dipping into Al's fund of ill-gotten money. Tony eliminates Kit as a suspect as he tries to solve the crime in this murder mystery.

Mac Robbins
as Sidney, the Organizer

Joe E. Lewis
as Himself
View All

Critic Reviews for Lady in Cement

The political resonance of Frank Sinatra's sleepwalking is unsubtly reactionary.

To be honest, I can't remember 24 hours later exactly what the plot entailed.

I do wish the scenarists had made a less tangled script and one less laden with Damon Runyon clichés.

Lady in Cement just simply isn't a good film, ruined at nearly every instance by a jaunty score from Hugo Montengero which suggests the film is a humorous comedy instead of a murder mystery.

Once again, the crimes and the answers aren't immersed in twists; the culprits are obvious once a few of the details are explained.

A mildly diverting watch; the most ingratiating turn comes from Dan Blocker (Hoss on TV's smash show Bonanza) in a rare big-screen appearance.

Audience Reviews for Lady in Cement

There are no featured audience reviews yet. Click the link below to see what others say about Lady in Cement!