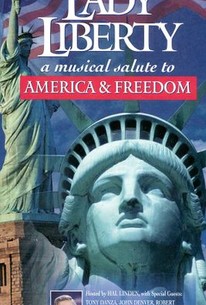 Hal Linden hosts this musical special and salute to the American way of freedom and liberty. Many special guest stars appear in this video, including performances by The Beach Boys, Tony Danza, John Denver, and Martin Sheen. Also featured are Lee Greenwood, best known for "God Bless the USA", Curtis Mayfield, the immortal Woody Guthrie, The Young Rascals, and footage of other performers. Robert Guillaume, Stanley Kramer, and Mike Love also appear.

There are no critic reviews yet for Lady Liberty---A Musical Salute to America. Keep checking Rotten Tomatoes for updates!

There are no featured reviews for Lady Liberty---A Musical Salute to America at this time.