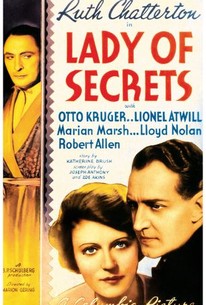 In this tragic drama, a pregnant daughter prepares to marry a man she doesn't love when her 'sister' tells her a story. It seems that when the older woman was a girl she too got pregnant by her lover. When her father found out, he had the impregnator sent to war where he was killed. Meanwhile he allowed his daughter to keep her little girl under the provision that she tell the child that she is her sister. The sister of course, is the woman's daughter. Unfortunately, when her father learns that his daughter has told her daughter the truth he has her committed to an asylum.

Critic Reviews for Lady of Secrets

If you are giving up all forms of amusement for Lent or for any other reason, we recommend Lady of Secrets.

There are no featured reviews for Lady of Secrets at this time.