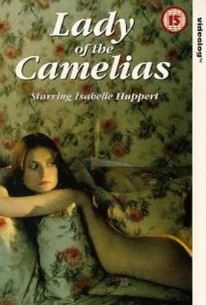 In the original story of Camille by Alexandre Dumas, Jr. La Dame aux Camelias, a beautiful Parisian courtesan, Marguerite Gautier, (called "Camille" because of her love for camelias) is supported by a series of aristocratic lovers, but does not fall in love until she meets Armand Duval. Armand's father lets it be known that Camille would ruin Armand because of her "low" past, and she leaves to save his reputation, saying she does not love him anymore. She soon contracts tuberculosis, and Armand hears that she is dying. He rushes to her side, finds out she has loved him all along, and she dies knowing he has always loved her. The True Story of Camille uses the ploy of Alexandre Dumas, Jr. doing his version of "Camille" at the turn of the 20th century, as a means of introducing a flashback to the "real" story behind the "real" Camille, Alphonsine Plessis. In the film, Alphonsine (Isabelle Huppert) - a country girl - was sold by her father to a wealthy neighbor, which starts her off on a round of living in expansive palaces and keeping company with wealthy aristocrats and eventually, Alexandre Dumas, Jr. himself. But that trajectory did not happen all at once. Alphonsine first survives, barely, as a seamstress in Paris. Then she becomes a prostitute, after which a Count Peregaunts (Bruno Ganz) marries her, then more or less disappears, leaving her to become a high-class courtesan. As she makes her way from one handsome, aristocratic client to the next, a noble protector, Count Stechelberg (Fernando Rey) keeps her out of harm's way. By the time she and Dumas meet, she has become infected with tuberculosis - and she has created the inspiration for Dumas' story of Camille. Her father comes along at this point, however, ready to trounce Dumas for romanticizing his daughter's wretched life - the same father that sold her off in the first place. If the viewer can remember that the characters of Marguerite Gautier (Carla Fracci) and Armand Duval from Dumas' story of Camille have been given their "real" personas as Alphonsine Plessis and Dumas in this film, then the story within a story make more sense. ~ Eleanor Mannikka, Rovi

There are no critic reviews yet for Lady of the Camelias (La storia vera della signora dalle camelie). Keep checking Rotten Tomatoes for updates!

There are no featured reviews for Lady of the Camelias (La storia vera della signora dalle camelie) at this time.