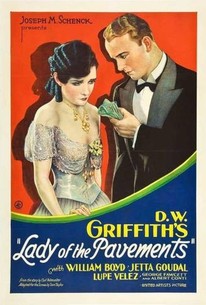 Lady of the Pavements Photos

D.W. Griffith's last silent film, The Lady of the Pavements was based on La Paiva, a story by Karl Gustav Vollmoeller. Set in 19th-century Paris, the story concerns the romantic travails of Prussian aristocrat Count Karl von Arnim (played by future "Hopalong Cassidy" star William Boyd). Feeling betrayed by his flirtatious fiancee, Countess Diane des Granges (Jetta Goudal), Karl misanthropically declares that he'd sooner marry a "lady of the pavements" (Hollywoodese for "prostitute"). Hoping to demonstrate to Karl that appearances are deceiving, Diane engages the services of low-born Spanish cabaret entertainer Nanon del Rayon (Lupe Velez), dressing the girl in gorgeous gowns and passing her off as a noblewoman. Karl is smitten by Nanon and proposes marriage, but during their wedding reception Diane spitefully reveals Nanon's true identity as "proof" that Karl wouldn't know a Girl of the Streets if he actually met one. By this time, however, Karl has genuinely fallen in love with Nanon, whereupon Diane's nasty scheme blows up in her face. For a director who was considered a relic and a has-been, D.W. Griffith invests Lady of the Pavements with all sorts of cinematic nuances, including a remarkable multiple-exposure sequence in which William Boyd appears on screen in 13 different guises at once! Completed as a silent, the film was slightly reshot to qualify as a part-talkie, including two musical numbers and a dialogue sequence in which Griffith experimented with "sound modulation" -- another important (and frequently unheralded) innovation from the Father of American Film. ~ Hal Erickson, Rovi

Critic Reviews for Lady of the Pavements

What shortcoming keeps D.W. Griffith from making a new masterpiece and so regaining his lost supremacy in the motion-picture field?

There are many things that could be praised in this picture. The acting of Lupe Velez, for example; also the lavishness of the production, as well as several dramatic scenes.

There are no featured reviews for Lady of the Pavements at this time.

Lady of the Pavements Quotes