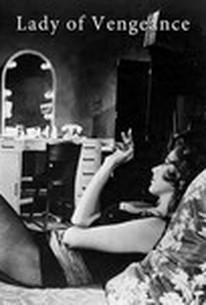 Old-timer Dennis O'Keefe and newcomer Ann Sears star in the British melodrama Lady of Vengeance. O'Keefe plays an American publisher headquartered in London, whose young ward (Eileen Elton) is driven to suicide. The distraught O'Keefe hires a professional criminal (Anton Diffring) to plot the murder of the man responsible for the girl's death, with the proviso that the victim undergo the torments of the damned before he is finally killed. Trouble is, the wrong man is targeted for the publisher's revenge. Nominal leading lady Ann Sears does what she can with the nondescript role of O'Keefe's secretary. ~ Hal Erickson, Rovi

Critic Reviews for Lady of Vengeance

Tedious noir crime drama about the insanity of revenge.

There are no featured reviews for Lady of Vengeance at this time.