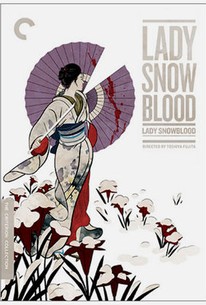 A woman seeks the revenge that was her birthright in this action thriller from Japan. A gang of ruthless thieves break into the home of a rural couple, and after taking their valuables, they murder the husband and rape the wife once they've beaten her senseless. When the ravaged wife tracks down one of the thieves and attacks him, she is arrested by police; she was left pregnant by the rape, and gives birth to a daughter months later, dying shortly after delivery. The daughter, Yuki (Meiko Kaji), is raised by a priest who teaches her how to use a sword and trains her to show no mercy to the men who brutalized her family. When she turns 20, Yuki sets out to seek revenge, looking beautiful and tranquil on the outside but possessing a powerful taste for vengeance against those who wronged her and her mother. Lady Snowblood was written by Kazuo Koike, who also scripted several of the most memorable films in the Lone Wolf and Cub series. ~ Mark Deming, Rovi

On DVD This Week: Sicario, The Walk, True Detective, and More

Lady Snowblood only half-heartedly revels in its heroine's bloody revenge, while focusing just as much on the tragedy of her circumstances and the absurdity of her vengeful fate.

More than just a bloody revenge movie, though it certainly is that, a number of thematic strands and political critiques run beneath pulp surface.

A violent cult film that maintains in its undercurrent a sly humor and a feeling that this is a special revenge film.

Mandatory viewing for all KILL BILL fans. Meiko Kaji is a heartstopping beauty with big, expressive eyes that are suitably haunted-looking for the character she portrays.

When a gang of confidence tricksters murder a schoolteacher and rape his wife she plots bloody vengeance against them, but when she is imprisoned for life she passes the task onto her newborn daughter. There's no way around saying it; this IS Kill Bill. A cold blooded but beautiful assassin who hunts down her enemies one by one, each assigned their own headed chapter of the story with blood and violence contrasted with tranquil scenes of falling snow...? There's even a section where a flashback is told through manga comic art. Quentin, you ought to be ashamed of yourself! This attractively shot film actually has a strong element of Spaghetti western about it despite the katanas and blood spurts because of the theme of lone stranger cutting down their enemies to exaggerated sound effects and a deeply 70s soundtrack, and the combination works well. There are some very attractive images and nicely framed shots and Meiko Kaji is arresting as the steely beauty. Plot is a little thinner on the ground however and there is little emotional involvement as the main character is SO single minded, but its influence over more contemporary films has kept it feeling relatively fresh and it's a landmark hack and slasher for those interested in the genre.

Films like I Spit on your Grave don't even come close to these revenge flicks made here. What can i say? Great acting (Or even BETTER!) cool action story with pleanty of gore and violence. Fucking awesome soundtrack. Nice costumes and themes...ECT. Though i liked the second more.

stylish and gory and i might have enjoyed it alot more if i'd never seen kill bill...so thx quentin, for ruining it for me :(