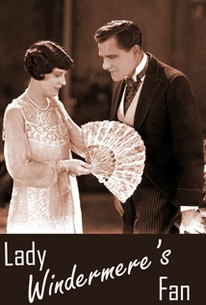 Unable to rely upon Oscar Wilde's epigrammatic dialogue to carry the day (this was, after all, the silent-film era), director Ernst Lubitsch substitutes verbal wit for the visual variety in his 1925 filmization of Lady Windermere's Fan. Ronald Colman has one of his first important screen roles as the slightly caddish Lord Darlington, who is in love with the very pretty--and very married--Lady Windermere (May McAvoy). The lady is rescued from disgrace at the hands of Darlington by the notorious Mrs. Erlynne (Irene Rich), who unbeknownst to everyone is Lady Windemere's long-lost mother. Filmed at the still young-and-hungry Warner Bros. studio, Lady Windermere's Fan was an enormous hit, and an instant candidate for the many "Ten Best" lists tabulated by the fan magazines of the era.

May McAvoy
as Lady Windermere

Carrie Daumery
as The Duchess of Berwick

[Lubitsch's] ingenuity, his great knack of presenting commonplace incidents from inobvious and illuminating angles, though less amusing than in Kiss Me Again, is as effective as ever.

One of Ernst Lubitsch's greatest accomplishments.

Skillfully casts its light on the hypocrisies and phony games played by the upper-crusts.

There are no featured audience reviews yet. Click the link below to see what others say about Lady Windermere's Fan!