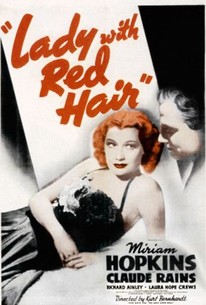 The notoriously temperamental Miriam Hopkins is ideally cast as equally contentious theatrical prima donna Mrs. Leslie Carter in The Lady With Red Hair. As rapidly paced as any Warner Bros. gangster picture, the film charts Caroline Carter's rise to fame on Broadway through the auspices of impresario David Belasco (Claude Rains). The screenwriters take great pains to cast Carter in a sympathetic light, suggesting that she turned to the lucrative world of the theater to regain custody of her son (Johnnie Russell), won by her husband in their acrimonious 1889 divorce settlement. Though at first she meets with nothing but failure, our heroine perseveres, and by 1904 she is the idol of millions throughout the world. Along the way, she marries visionary producer Lou Payne (Richard Ainley), but by film's end she is reunited with her mentor Belasco. A young Cornel Wilde makes his screen debut as an aspiring actor in a boarding-house sequence.

Alexis Smith
as Girl at Wedding

Creighton Hale
as Eddie the Reporter

Triumph and failures are expressed with true sincerity in this interesting movie. [Full review in Spanish]

There are no featured reviews for Lady with Red Hair at this time.