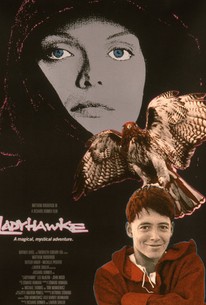 Critics Consensus: There's pacing problems, but Ladyhawke has an undeniable romantic sweep that's stronger than most fantasy epics of its ilk.

Critic Consensus: There's pacing problems, but Ladyhawke has an undeniable romantic sweep that's stronger than most fantasy epics of its ilk.

In medieval France, a young, nebbishy pickpocket befriends a knight who has fallen under a strange curse. It is soon up to the pickpocket to help reunite the knight and his lady love and defeat the evil bishop behind the curse in this romantic fantasy film.

Don Hutson
as Guard on Call

Don Hudson
as Guard on Cart

Gaetano Russo
as Guard in Cell

Unfortunately, director Richard Donner never quite gets the tone right, and the pace is positively stuporous. The horses gallop, but the film barely canters.

It's a likable-enough adventure that feels much smaller than the widescreen landscapes in which it takes place.

A thoroughly delightful fantasy romance that holds up remarkably well and deserves to be rediscovered by today's younger audiences.

A competent fantasy with likeable heroes and dastardly villains, though the running time is slightly overlong.

Concerning the removal of a certain diabolical curse which keeps two lovers always together, yet always apart, Ladyhawke is a successful, unpretentious little film that uses strong characterization rather than special effects to achieve its goals.

The film is gorgeous to watch, especially since the quality of light is so central to the plot: Is it afternoon or sunset?

We need more fantasy like this: high adventure, brilliant swordplay, convincing magic, three-dimensional characters, arresting cinematography, and best of all, a good story.

Weak pacing makes for a difficult watching, despite the talented leads.

Directed by Richard 'Lethal Weapon' Donner but looking more like an epic Ridley Scott picture. This is a curious tale of love and romance tied in with a typical medieval/dark ages animal based curse. A form of witchcraft cast upon two young lovers by a man of the cloth, a Bishop, simply out of jealousy. A Romeo and Juliet style historical fable. First thing that will hit you with this film are the striking visuals. The story is set in central Italy (I presume) and there is a very real historical grandiose feel to everything you see. All the scenes are set within (or around) real locations, real castles, real towns, real ruins, real old courtyards etc...The visuals are HIGHLY stylised believe me! every shot is incredibly slick and glossy looking, one could coin the term 'historical scenery porn'. Everything looks like a beautiful living water colour painting with stunning sunsets, dawns, dusk's and twilight's set against some jaw-droppingly lush European countryside and rustic ruins villages and fortresses. Admittedly the one draw back about the visuals are they look too clean, almost too good!. I know this is a fairytale of sorts, a fantasy, but there doesn't really appear to be any dirt or mud anywhere hehe. All the buildings are spotless, the countryside is perfect, every character is dressed immaculately in clean attire, the horses have gleaming coats etc...It all has a lovely dream-like quality but I just felt for the period some grubbiness was required. The other main thing that will hit you is the strange choice in musical score. I'm sure most would think an orchestral score would be fitting for such material, but no, Donner goes down the 'Tangerine Dream/Legend' route with an 80's electronic rock based set of tracks. There are of course some more traditional tit bits in there but most action and fantasy moments are accompanied by this odd rock score. The problem is the visuals and general style in this film are so good and authentic the score just doesn't sit right in my opinion, it feels a bit cheesy and ruins the classical approach. I'm guessing the film 'First Knight' may have pinched this idea, thing is that film didn't have the spectacularly lavish locations, good cast, slick camera work, timeless story...OK that film was just crap. I think this film also has some great casting. Both Hauer and Pfeiffer really do look stunning with their big blue eyes, makes one feel quite ordinary and pathetic. Hauer really is the true knight in shining armour here, the real Prince Charming...OK maybe not in shining armour but instead uber cool pitch black...errr armour/Jedi robes kinda thing. Typical heroic attire with a sweeping black cape with posh red lining, this guy looks quite wealthy. With his blonde hair, blue eyes and atop his black steed he really does look very handsome, first time in awhile I can genuinely honestly feel comfortable saying a bloke looked attractive, I was envious. On the other hand Pfeiffer has this ethereal-like beauty with her lovely short blonde locks, pale skin, strong facial structure and yet more big blue eyes. She truly looks angelic, the perfect Princess or damsel in distress for Hauer's brave knight, together they really are a perfect match and I really could believe the fact they turn into a wolf and hawk at their respective times (Ladyhawke...speaks for itself right). Unfortunately the film is let down by the one casting of Broderick who is a stain upon this gorgeous film. He is truly annoying with his constant nervous ramblings in that squeaky voice of his. I just wanted to slap him across the face every time he made those idiotic expressions of shock or surprise...good God!. The plot does take a bit of getting used too, Hauer as a wolf by night and Pfeiffer as a hawk by day, it also takes time to explain this which is a bit confusing. There are no horrific mutations or transformations though, its all done with subtle fades and nice eye close ups which works well. Overall I did get the impression the plot was stretched out a bit because there wasn't much to actually do, the aim of the game for Hauer is kill the Bishop who cursed them. Not much more to it than that so I think there is filler or padding here and there, it can feel dull in places. You could say its all style over substance I guess, but that would be harsh methinks. Overall the film looks exquisite and is very realistic to reality, even if it is too clean to actually be reality. Everything and especially Hauer and Pfeiffer are period perfect, the pair look like characters from a classical fresco or mural come to life. You'd never guess this was a Richard Donner flick.

Excellent dialogues are this movie's USP. It's good to stumble upon such films once in a while when surrounded by movies relying on actor's body language for most of the part. I'm not against it; it's just that such an entertaining change is more than welcome and quite entertained. There were many flaws, but what it offered made me overlook it. The technical flaws are its main weakness; they're a bit too apparent. I feel that the director took the fact that it's a fiction overtly granted. Besides, I guess the movie could have used a trimming of 15-20 minutes. Another flaw was its casting. Everyone, but the actress playing the title role and the actor playing the Bishop, fit their role. However, Matthew Broderick was par excellence as Phillipe "Mouse" Gaston. He was charismatically fabulous. In fact, Phillipe's character alone was entertaining enough to make me ignore its flaws. Very much recommended from my end.

This medieval fairy tale by action specialist Richard Donner does look and feel dated from today's point of view but still has the heart-warming charm of a childhood favorite. While the soundtrack doesn't even try to hide its 80s heritage, the rest of the film feels medieval enough, with plenty of knight action, a curse, humor and romance. The latter may be a bit on the cheesy side, but you can't stay mad at the film for very long, because its basic premise is just sweet and enthralling. It also helps that the director knew exactly what buttons to push.