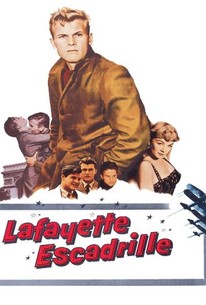 Though director William Wellman was attached to the Lafayette Flying Corps during WW1, many people believed that he was actually with the celebrated Lafayette Escadrille, and this 1958 actioner does little to dispel that belief. The film concentrates on a group of courageous young American aviators who, long before the USA's entry into the Great War, band together to fight the minions of the Kaiser in the skies of France. One of these reckless flyboys is Thad Walker (Tab Hunter), who arrives in Paris after being thrown out of his wealthy father's home. Joining the Escadrille with Walker are fellow expatriates Tom Hitchcock (Jody McCrea), Duke Sinclaire (David Janssen) and "Wild Bill" Wellman (played by the director's son, Bill Wellman Jr.). After a bit of parlez-vous with the local mademoiselles, Walker and his pals take to the air, and at this point, the film really gets off the ground (no pun intended). The spectacular aerial sequences are evocative of those in Wellman's silent classic Wings, though Lafayette Escadrille itself falls a bit short of classic status.

Veola Vonn
as The Madam

Will Hutchins
as Dave Putnan

George Nardelli
as Concierge
View All

Falls flat even if a war film close to the director's heart.

The Americans who flew for France in the 1914-18 war are poorly memorialized in this trashy Hollywood drama.

There are no featured audience reviews yet. Click the link below to see what others say about Lafayette Escadrille!