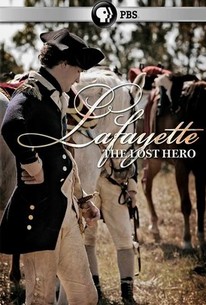 The title refers to Gilbert du Motier, Marquis de Lafayette, a French aristocrat who lived from 1757 to 1834; as helmed by Oren Jacoby, this biographical documentary tells of the Marquis's life and times. A controversial figure (and one commonly overlooked by historians), Lafayette left home before his 20th birthday to fight for the independence of the then-fledgling United States; later, in the 1780s, Lafayette returned to France and courageously struggled for democratic reform. The strength of his convictions and the success of his actions eventually helped him glean heroic stature among his fellow Frenchmen.

There are no critic reviews yet for Lafayette: The Lost Hero. Keep checking Rotten Tomatoes for updates!

There are no featured audience reviews yet. Click the link below to see what others say about Lafayette: The Lost Hero!