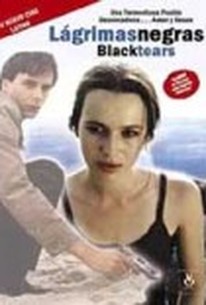 Lagrimas Negras is a psychological drama about love, but also the story of a young man who leaves his normal existence behind to embark on a journey which ends in violence. The opening sequences show apprentice filmmaker Andres (Fele Martinez) editing a documentary whose images set the bleak tone of the film. He spends a night with Alicia (Elena Anaya), a girl he has known since childhood, and later gets attacked on the street by two young women. His obsessive search for the assailants leads him to one of the women, Isabel (Ariadne Gil), who comes from a wealthy family and suffers from a split personality. Andreas gets involved with her, which totally changes his life until he finds it impossible to live in two different worlds. He is convinced he can help Isabel set her life straight and gives up everything he has to see things through the bitter end. Ariadne Gil's performance is remarkable as the disturbed Isabel and her alter-ego, Ana, but Martinez is weak as Andres. Long dialogue sequences distract the audience from director Franco's main theme -- the damage lurking behind the façade of respectability. The film will be remembered, not so much for its artistic merits, as for the fact that director Ricardo Franco died during the shooting; Fernando Bauluz, his assistant, had to complete the film. Lagrimas Negras was screened as part of the Panorama section of the 49th International Berlin Film Festival, 1999. ~ Gönül Dönmez-Colin, Rovi

There are no critic reviews yet for Lagrimas Negras (Black Tears). Keep checking Rotten Tomatoes for updates!

There are no featured reviews for Lagrimas Negras (Black Tears) at this time.