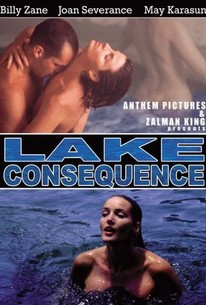 This erotic drama stars Joan Severance as Irene, a repressed housewife who develops a lustful and somewhat obsessive attraction to Billy (Billy Zane), a handsome landscaper working with a crew of laborers on her yard. With both her husband and son gone on a fishing trip for a few days, Irene becomes a stowaway in her own camper, which Billy steals for a weekend getaway with his girlfriend Grace (May Karasun), unaware that Irene is inside. After Irene joins the surprised couple, she's invited to join them as they relax in rural environs and enjoy a Chinese festival being held nearby. Thanks to the willing and able assistance of Billy and Grace, Irene also unlocks her sexual side and discovers some deeply repressed desires. Lake Consequence (1992) was created by the soft-core drama duo of director Rafael Eisenman and writer/producer Zalman King.