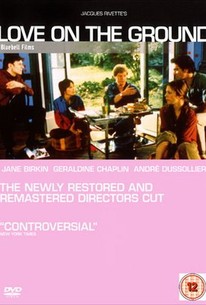 The avant-garde founder of French New Wave Jacques Rivette, offers an on-going treatise of film versus theater in this basically non-story about two actresses and a director, or from another perspective, a play and a film. In the opening scenario, a couple come out of a bathroom and are surprised by a group of people. It turns out that the people are the audience watching a play performed in a private home. Among the spectators is Clément (Jean-Pierre Kalfon) a director who invites two actresses (Jane Birkin and Geraldine Chaplin) to his home for the following Saturday, to work on a performance. Clément was having an affair with Béatrice (Isabelle Linnartz) who has apparently disappeared. A magician named Paul (André Dussolier) is his current lover and lives in Clément's home. After the actresses arrive, they find themselves influenced by Paul's magic and start to see their future, while the story they are enacting stays fairly close to Clément's own life. After many rehearsals over one week's time, the play is performed while actual changes happen in the corresponding characters in Clément's life -- until the play within a play ends in an interesting, controversial, yet logical manner.

Jane Birkin
as Emily
View All

Even when playful, Rivette is a drag.

There are no featured audience reviews yet. Click the link below to see what others say about L'Amour Par Terre!