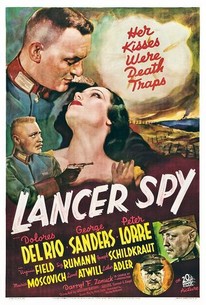 Set during World War I, Lancer Spy stars a young George Sanders as Michael Bruce, an officer in the British Navy who bears an uncanny resemblance to the recently-captured Baron Kurt von Rohbach (also Sanders). Rohbach is highly connected in the German aristocracy, and his capture has been kept quite secret. This allows Bruce to be drafted into service to impersonate the German officer, infiltrate the enemy at the top level, and send back information that can turn the tide in the war. Bruce does a remarkable job and fools just about everyone; only the head of the secret police Major Gruning (Peter Lorre) has his doubts, but he can hardly accuse someone of the Baron's standing on nothing more than suspicions. He therefore engages a comely nightclub singer Dolores Daria Sunnell (Dolores Del Rio) to seduce Bruce and find out if his suspicions are sound or baseless. Unfortunately for Gruning, the singer finds her heart genuinely stolen by the imposter. She discovers the truth, but refuses to out him. Meanwhile, Gruning has laid his hands on some evidence of his own, and he moves to capture Bruce. Having accomplished his mission, Bruce flees to Switzerland. Gruning captures Dolores instead and puts her to death for her betrayal.

Walter Bonn
as Officer on Train

Greta Meyer
as Woman on Train

Sam Harris
as Officer at Party
View All

There are no featured reviews for Lancer Spy at this time.