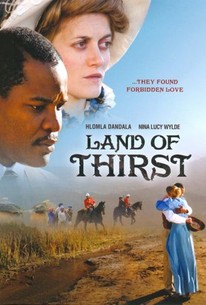 Pereceval Gibbon's classic novel Margaret Harding, Land of Thirst arrives on the big screen courtesy of director Meg Rickards. Khanyiso Phalo was the son of an African chief. As a young boy, Khanyiso was separated from his family by British soldiers and sent to study medicine in England. Years later, in 1913, Khanyiso returns to Africa at the height of racist Colonial rule. There, he meets and falls in love with an English woman named Margaret Harding. Their romance violently protested by scornful settlers and vicious soldiers alike, the couple resorts to hiding, lying, and cheating in order to keep their love alive and escape the people who would see them killed.

Critic Reviews for Land of Thirst

There are no critic reviews yet for Land of Thirst. Keep checking Rotten Tomatoes for updates!

There are no featured reviews for Land of Thirst at this time.