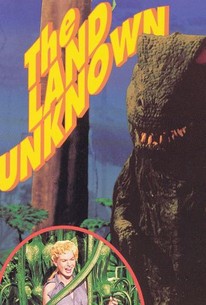 Virgil W. Vogel's fantasy details a Navy patrol on an Antarctic expedition which stumbles onto a bizarre subterranean colony of prehistoric creatures.

Critic Reviews for The Land Unknown

Despite its obvious flaws, it was mildly effective in its imaginative and realistic treatment of a pre-historic lost valley.

Audience Reviews for The Land Unknown

I happened to come across this lovely gem of a movie whilst looking up information for a review about another 50's B-movie. Honesty, I had never heard of this movie before and up to this point, I thought I had covered all the unknown island/continent/world fantasy movies. Interestingly enough this film was inspired by a real time event in 1947 when warm water was discovered in Antarctica, but no dinosaurs. The plot involves an expedition to simply map the vast area of Antarctica and check out this unusual body of warm water found in 1947. As per usual we have the predictable set of short, back n sides, military types running the show, and just for eye candy purposes we have the attractive lady too. Whilst on a scouting mission in their helicopter a small team of explorers (three blokes and the lady) hit a bad storm and are forced to land. As you may have guessed they land in an unknown deep warm volcanic crater many miles below sea-level. This crater just so happens to be the home for an entire prehistoric jungle complete with dinosaurs, man-eating plants and various extinct flora and fauna. All that's missing here is Doug McClure. Again to be honest I was expecting a bit of a crap fest here, the films poster looked hokey as hell, as said I'd never heard of the film and pictures I had seen online looked pretty terrible. Much to my surprise, when the team vacate their chopper and start to explore their new ancient surroundings, I was really pleasantly amazed at how decent the sets and props were and how large it all appeared to be. Yes everything looked like a set, that was to be expected, but there was a lot of solid depth and detail here. Add to that the lovely large matte paintings for the background landscapes and you have a really atmospheric little picture going on. The use of a smoke machine to create swirling mist and fog really helped to add a good level of depth and perspective whilst also hiding obvious plastic plant life and rocks. The real fun came along with the dinosaurs of course, were they realistic? well no, lets not get carried away here. The first special effect was the old concept of using real monitor lizards on a small model landscape complete with matte painting backgrounds. That footage would then be added to live action footage of the actors as a rear projection effect. This idea was further used in a few similar themed movies, although I'm unsure if this movie started that trend. Overall it does work to a degree, the lizards look good, but the hopelessly obvious rear projection effect against the actors footage never really works. The lizards don't really pull off the size trick either, you can see they aren't huge because we know they aren't. The other main effect is that of the T-Rex, in this case a man in a rubber suit just like 'Godzilla'. Now although this sounds ridiculously hokey (and it was), it did look really good. Suspension of disbelief is the key here folks, yes we all know its a man in a rubber suit, yes the suit looks rubbery, yes the dinosaur clearly walks like a man...but hey, it still looks cool and its a fun fantasy people. Another dinosaur effect was the large Nessie-like Elasmosaurus in the lake. Now this was a mechanical puppet that clearly only had so many moves at its dispersal, head up, head left, head right, head down and submerge. What makes things worse is the fact its mouth and eyes never move, its one of those creature puppets that, due to technical limitations, always had a static expression which reduces the thrill factor really. So yes it must be said that despite what you might think, the effects in this rather unknown film (no pun intended) are in fact pretty sweet and highly atmospheric. Everything looked suitably murky, moody, mysterious and eerie, the sound effects added to that and at times the film could be a tad scary even, slightly more gritty than other similar movies of the era. Hell at one point we see a cute little Tarsier get scooped up and devoured by a flesh-eating plant...not literately of course. The only thing I didn't really get was why the lone survivor Hunter (a convenient crash survivor from a previous expedition), didn't want to leave the crater with the others. OK he's been stranded there a long time and gone a bit loopy, but surely you'd want to leave, right? Don't expect anything new here, lets face it, if you've seen one lost world with dinosaurs flick, you've kinda seen them all and this is no exception. All the actors do their thing well, nothing particularly outstanding really, its all clockwork and passable stuff, again, we've seen this all before. That being said, this is still a highly enjoyable, atmospheric and visually exciting movie with some great monster moments like the T-Rex, any 'Godzilla' fan will love that. You know what to expect basically, you know to appreciate these films for what they are and nothing more, just sit back and enjoy the charming ride.

Directed by Virgil W. Vogel and staring Jock Mahoney, Shirley Patterson and William Reynolds Eirin Rating-Not Rated The Land Unknown is one of those rare and very unknown dinosaur films that I just happened to love unlike Meany. Despite the flaws and how we later copied It to make The Last Dinosaur. But still yet again another 50s dino flick using men in dinosaur suits god why do they copy us. And remake our movies. Navy Commander Hal Roberts is assigned to lead an expedition to Little America in Antarctica to investigate reports of a mysterious warm water inland lake discovered a decade earlier. His helicopter and its small party, including beautiful reporter Maggie Hathaway, is forced down into a volcanic crater by a fierce storm. They find themselves trapped in a lush tropical environment that has survived from the Mesozoic Era. Fighting carnivorous plants, dinosaurs, and a limited time window, they struggle to survive and repair the helicopter, their only means of escape. They are both helped and hindered by Dr. Carl Hunter, a megalomaniac survivor of an earlier expedition, who has learned to adapt to the hostile environment. Looks expensive but its not rather very well done low budget stuff. 70% for story it's still interesting and good. 70% for acting not very strong but it pulls right throw. 70% for special effects there not fantastic and they don't use stop motion animation but they do get it right with our inventions. 60% for characters there bad but we get to know the heroes and villains. 80% for everything else. It has got some very well done sets. Any dinosaur film liker like myself would like it. Keiko's score. 72-100

If we find one more unknown island with dinosaurs on it, I'm going to scream! Not one of these kinds of movies is any good.

One of those campy little low-budget gems I keep tucked away in a dusty corner of my DVD collection. If I started a list of films with really crappy looking dinosaurs this would be #1.