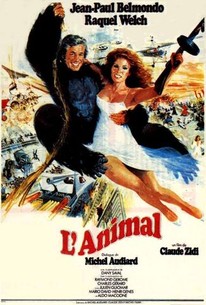 Jean-Paul Belmondo plays Michel Gauché, a stunt double and trickster who is crazy in love with his former fiancee, work-mate, and fellow stunt performer Jane (Raquel Welch). She, however, is so angry with him for landing her in the hospital due to a badly performed stunt that she breaks off the engagement. Belmondo also plays Bruno Ferrari, the movie star he is doubling for, an effeminate homosexual who lusts after his stuntman. Because Jane is angry with Michel, she falls into the arms of a film producer, and arranges for Michel to re-do the same stunt over and over again endlessly. She also tries to woo Bruno the movie star and discovers that he is not interested in women. Michel tries hard to win her back, sometimes pretending to be the movie star, which confuses her to no end. Just as she is about to marry a dull aristocrat, Belmondo appears in an old gorilla outfit and abducts her from the aisles of the church. Belmondo was famous for doing all his own stunts, and he continued that tradition in this film. ~ Clarke Fountain, Rovi

Charles Gérard
as Hyacinthe the Manager

Julien Guiomar
as Fechner the producer

Jane Birkin
as Herself

Johnny Hallyday
as Himself

Claude Chabrol
as Himself

There are no critic reviews yet for L'Animal (Stuntwoman). Keep checking Rotten Tomatoes for updates!

There are no featured reviews for L'Animal (Stuntwoman) at this time.