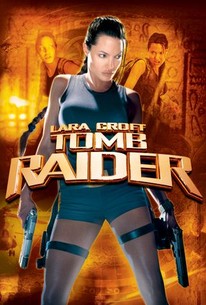 Critics Consensus: Angelina Jolie is perfect for the role of Lara Croft, but even she can't save the movie from a senseless plot and action sequences with no emotional impact.

Critics Consensus: Angelina Jolie is perfect for the role of Lara Croft, but even she can't save the movie from a senseless plot and action sequences with no emotional impact.

Critic Consensus: Angelina Jolie is perfect for the role of Lara Croft, but even she can't save the movie from a senseless plot and action sequences with no emotional impact.

A popular video game comes to the screen with this big-budget adventure starring Angelina Jolie as a buxom heroine recalling equal parts Indiana Jones and James Bond. Jolie is Lara Croft, a proper British aristocrat groomed at schools for the children of the elite. Croft leads a double life, however, as an acquirer of lost antiquities through questionable means, highly trained in combat skills with the help of a robotic opponent called Simon. Despite her exciting profession and a life of wealth and breeding, Lara pines for her father, Lord Croft (Jon Voight), whose passing left her orphaned. On the eve of a celestial event that will also mark the anniversary of Lord Croft's death, Lara comes up against an ancient organization called the Illuminati, represented by the sinister Powell (Iain Glen), who's in pursuit of an ancient relic with power over time and even death itself. With the aid of her high-tech support team, Lara travels to some exotic locales in search of the artifact, including a foray into a decrepit Asian temple guarded by lethal stone apes and other creatures that spring to life. Filmed at various locations in Great Britain as well as Iceland and the Angkor Wat temples of Cambodia, Tomb Raider co-stars Noah Taylor, Chris Barrie, Daniel Craig, Rachel Appleton, Leslie Phillips, Mark Collie, and Julian Rhind-Tutt. ~ Karl Williams, Rovi

Lara Croft: Tomb Raider is incredibly silly. So silly in fact, that you just have to respect it.

Some great action sequences, but not much else.

[A] movie based on a video game that's unafraid to look absurd but lacks the self-conviction needed to come off as camp.

A jerky, fragmented tale that jumps from one exotic location to the next without any explanation or flow.

Not disastrous, but somewhat disappointing nonetheless.

In the end, for all her über-babe sexiness, there is something just a wee bit humourless about Angelina Jolie.

Where's the quickening of the pulse, the racing of the heart, the holding of the breath? With Lara Croft Tomb Raider, the most a viewer can expect is the numbing of the brain and the closing of the eyelids.

Jolie was in tip top shape for this role, and she did a very good job bringing this video game icon to life.

Although the idea of a female adventurer (essentially a counterpart to Indiana Jones) sounds exploitable, the execution of her feats are incredibly pitiful.

Angelina Jolie underscores Lara's genuinely aggressive appetite for destruction with a sweet, reserved composure that grows on you throughout.

Bad is most ways that you can rate a film on, but at the same time, get some friends around and shut your brain off and you can have a good laugh at it.

Based on the popular PlayStation video game series, Lara Croft: Tomb Raider should have stayed just that - a video game.

Debbie Lynn Elias
Behind The Lens
View All Critic Reviews (163)

No one could fit into this role better than Angelina Jolie. Not only does it have a superbly selected cast, the action sequences are thrilling and best of all everything else in the movie distracts you entirely from the plot that although isnt that great is very, very imaginative.

Not so entertaining. Some pretty bad effects...and a not so interesting plot. Almost a 3 star...close but no cigar.

As a major fan of the video game and with a deep, unrelenting contempt for Angelina Jolie, this movie had a lot to prove to me and for the most part did. Witty and fast paced, I felt that it remained true to the character of Lara Croft and the franchise, even if I felt it was slightly moronic not to choose one of the many magical BRITISH actress' that could have played this role better than old fish face Jolie ever could.