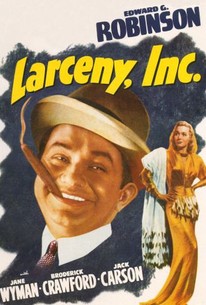 This parody of gangster flicks centers on an incarcerated gangster who decides to reform after he is released from Sing Sing. He and his cell mate have earned a small fortune in investments and are planning to buy a dog track. Unfortunately, another prisoner eavesdrops and attempts to force the fellow to use his savings to buy a luggage store and then dig a tunnel to the bank next door so they can easily rob it. The reformer and his partner refuse. They sing a different tune when they learn that most of their money was lost by their third partner. In desperation, he buys the suitcase outlet. While he tries to deal with his many customers, the other two bumblers attempt to dig, but it's not easy because every time someone comes in, they must stop their noisy operation. More trouble follows when another gangster tries to get in on their operation.

William B. Davidson
as McCarthy

Emory Parnell
as Off. O'Casey

Fred Kelsey
as Bronson
View All

Mild spoof of gangster films with a good cast and an irresistible premise.

...amusing, lightweight fun, with the biggest gangster star of them all, Robinson, parodying his own gangster-movie persona. (Warner Bros. Gangsters Collection, Vol. 4)

Actually quite amusing. A good cast with a witty script keeps you engaged.